WASHINGTON – This week in Congress, Secretary Azar’s drug rebate rule that HHS claims is intended to lower drug prices was called out repeatedly, even by pharma. The rule is backed by big pharmaceutical companies, who have used the rule to blame pharmacy benefit managers for high drug prices.

“We’re not surprised that big pharma may be benefiting from this administration given that HHS is headed by a former pharma executive,” said Lizzy Price, spokesperson for Restore Public Trust. “But what’s alarming is Secretary Azar’s false claim that his drug rebate rule is intended to lower drug prices when even pharmaceutical companies admit that it won’t.”

Below is a collection of lowlights from the week.

On Tuesday, Senator Whitehouse called out pharmaceutical companies in a hearing for their “epic political maneuver” when they shifted the blame for high drug prices onto pharmacy benefit managers. 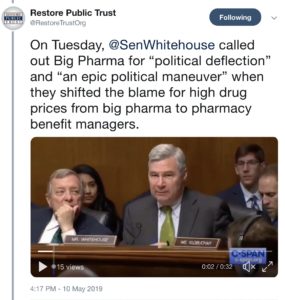 And on Thursday, in response to questioning by Rep. Frank Pallone, pharmaceutical companies admitted that Azar’s drug rebate rule “won’t have any impact on high drug prices.”