ATLANTA, GA – Today, Restore Public Trust’s campaign to hold corporations accountable for hiring Trump administration officials involved in the development, execution, or defense of the family separation immigration policy took to the streets of Atlanta in the form of a mobile billboard. The effort highlights the case of Sarah Isgur, a former spokesperson for then-Attorney General Jeff Sessions, who defended the horrific policy. CNN recently hired Isgur to oversee 2020 election coverage as political editor. 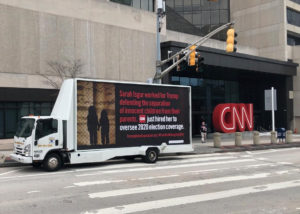 “There are some lines that simply cannot be crossed. Sarah Isgur defended and failed to answer serious questions about the Trump administration’s inhumane family separation, demonstrating a shameful disregard for the truth, and for the well-being of thousands of children,” said Karl Frisch, a spokesperson for Restore Public Trust. “The people of Atlanta deserve to know more about the questionable company CNN keeps. With this hire, the cable news giant has done to itself what the Trump administration has been unable to do since taking office — tarnished its journalistic integrity and reputation as the most trusted name in news.”

Last week, Restore Public Trust launched a new campaign to hold accountable the agencies, companies, and individuals who are responsible for developing, implementing, and/or defending the Trump administration’s family separation policy. In addition to supporting Congressional oversight responsibilities, the organization will also drive accountability efforts against lawmakers in their home states and target corporations who are benefiting from the policy. The campaign will  also encourage companies to avoid hiring or working with any Trump administration officials who were involved in the policy.