Ross even attempted to get out of today’s hearing because he didn’t want to have to answer Congress’ questions about his personal finances. What’s more, Restore Public Trust has filed 13 Freedom of Information Act (FOIA) requests to the Department of Commerce regarding Ross’ financial disclosures among other subjects, and has yet to receive any response. 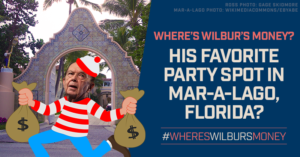 “Time and again, Wilbur Ross has dodged questions and hid the truth about his personal finances and ethics obligations. How can Americans trust that Ross isn’t looking out for his own financial interests when his disclosures have been rejected by the federal ethics agency?” said Lizzy Price, spokesperson for Restore Public Trust. “Just because Wilbur Ross is a billionaire doesn’t mean he’s above the law. He still has to play by the same rules as previous Cabinet Secretaries and Americans deserve to know the truth about where his money is invested.”

The digital campaign features pictures of the Commerce Secretary visiting his favorite places – Mar-a-lago, the Hamptons, and traveling on a private jet, one of his favorite past-times!

Earlier this year, Restore Public Trust launched joblossross.com, a website highlighting how Ross made himself and his investors rich by laying off over 11,000 American workers.