Today is Transportation Secretary Elaine Chao’s birthday! We know what you’re wondering– what do you get someone who is a Cabinet official, millionaire, and half of what is perhaps DC’s most powerful power couple? But fear not — based on her scandal-plagued past, Restore Public Trust has rounded up some ideas of things Secretary Chao might like: 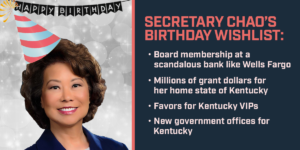 Happy Birthday, Secretary Chao! We hope your next year as a public servant is scandal-free, but based on your past, we doubt it will be.