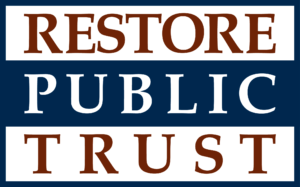 WASHINGTON — Today, Restore Public Trust, a new, non-partisan public interest group launched, announcing its efforts to expose corruption and malfeasance at the highest levels of government. As new polling data shows that nearly two-thirds of people believe the Trump administration has a corruption problem, Restore Public Trust announced its commitment to bringing to light instances where senior officials are using their government positions for personal gain, while Americans foot the bill.

“Government officials work for us,” said Restore Public Trust Executive Director Caroline Ciccone. “They should be accountable to us too. The American people expect federal officials to make decisions based on what’s best for the country — not what’s best for the officials’ wallets. Americans are deeply concerned about the level of corruption they see in the Trump Administration, and it’s why we will be focused like a laser on exposing corruption and holding officials accountable. It’s what the American people want and expect, and we are ready to take on the job.”

Restore Public Trust will focus on promoting accountability and transparency in government to root out corruption and malfeasance. Caroline Ciccone will serve as Executive Director of the Group. Members of the Advisory Board include Shripal Shah, Melanie Sloan, Melissa (Bruns) Bonine, Brad Woodhouse, and Kyle Herrig.

Findings from the survey can be found here and here.

The launch of Restore Public Trust comes at a critical time. As the poll demonstrates, the American people are deeply concerned with the corruption seen throughout the Trump Administration, and want these issues investigated more fully. Restore Public Trust will serve as a critical resource for policymakers and elected officials investigating public corruption; Americans looking for more information about what their government is or isn’t doing to advocate on their behalf; and journalists examining the alleged malfeasance of government officials. As part of its efforts, Restore Public Trust filed a dozen FOIAs today with cabinet agencies.