WASHINGTON — President Trump promised big changes to skyrocketing drug prices during Tuesday’s State of the Union Address, but his words are empty considering his pick to execute the job, Health and Human Services Secretary Alex Azar. A new TV ad from Restore Public Trust highlights Secretary Azar’s history as a pharmaceutical insider, proving he is the wrong person for the job. 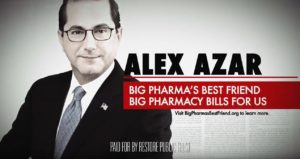 The 30-second ad spot, which launched online today, will begin airing in DC on Fox News, CNN, and MSNBC on Thursday. The ad is the first campaign of a longer-term effort by Restore Public Trust on drug pricing.

“Trump’s talk is cheap to American families that are being crushed by rising drug prices. This administration cannot hide the reality that Secretary Azar is not serious about helping Americans by reducing the cost of prescription drugs,” said Caroline Ciccone, Executive Director of Restore Public Trust. “Azar’s past is prologue when it comes to drug prices. While he served as a pharmaceutical executive at Eli Lilly, drug prices rose dramatically. Now, during Azar’s tenure at HHS, we’ve watched drug giants hike prices. Americans have had enough talk. What they want is action – and Azar has proven he can’t be trusted to act on their behalf.”

Azar questioned the Trump administration’s ability to lower drug prices before he was tapped to carry out its plan. Now, more than a year into his job, drug prices are soaring. Last year, Pfizer announced plans to hike prices on 41 of its drugs while AbbVie announced a proposal to buy back $5 billion in stocks.

Azar’s history only further underscores his credibility when it comes to helping real people cope with the rising prices of their prescriptions. During Azar’s tenure at Eli Lilly, drug prices were repeatedly raised. Insulin prices for diabetes patients skyrocketed, resulting in an investigation and class action lawsuit for price fixing. As a drug company executive, Azar opposed action to reduce drug prices, ensuring prices stayed high.