WASHINGTON – Today, in light of enhanced scrutiny in recent weeks over Department of Transportation (DOT) Secretary Elaine Chao’s dubious actions while leading the agency, Restore Public Trust launched a multi-platform campaign calling on Congress to #InvestigateChao for her shady business dealings and financial favoritism to benefit the interests of her husband, Senate Majority Leader Mitch McConnell, her family, and herself. The accountability group kicked off its campaign by sending a letter to House Oversight urging for an expansion of their investigation. See the letter HERE.

“Elaine Chao has spent her tenure as transportation secretary enriching herself and her family at the expense of the American public, and it’s got to stop,” said Lizzy Price, director of Restore Public Trust. “We applaud the House Oversight Committee for launching an investigation into Chao for misusing her position, but their current investigation leaves too many ethical questions unanswered. Chao must be held accountable for favors to Kentucky, where her husband Mitch McConnell will run for re-election next year, while stalling projects in other states that affect millions of Americans.

Price added, “Americans deserve to know how their tax dollars are being used: to enhance the public’s interest, or for political favors. Expect to hear more from us in the coming days about why it’s time to #InvestigateChao for the full scope of her corruption.”

The #InvestigateChao campaign includes a letter to the House Oversight and Reform Committee calling on it to expand its investigation, a public petition for supporters, additional press materials highlighting Chao’s shady actions, and a digital ad buy highlighting a video detailing some of Chao’s most egregious ethics breaches. The video is available HERE: 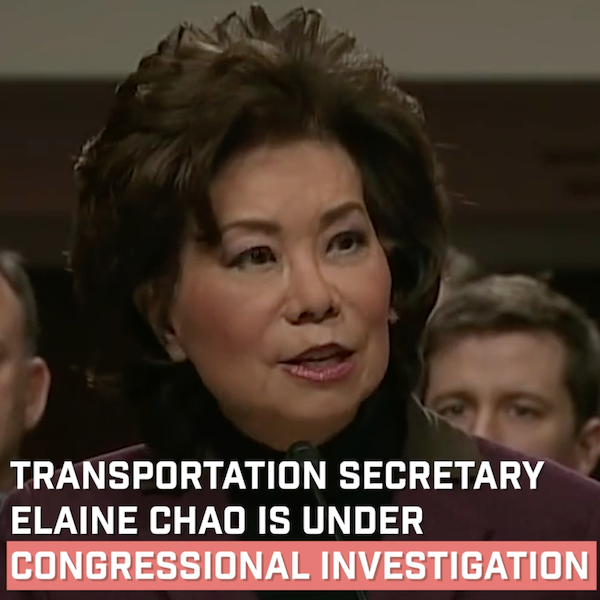 The #InvestigateChao campaign centers on a petition asking people to show their support for Congress to hold Chao accountable for:

The campaign comes on the heels of the House Oversight committee’s announcement last month that it will look into Chao’s illicit efforts to help her family’s shipping company, the Foremost Group, profit overseas, as well as her failure to divest from Vulcan materials, a construction manufacturer that does business with the DOT, after promising to do so.

For more information on the campaign, please visit InvestigateChao.org.