“Hearing the stories of American families dealing with rising drug costs is heart-breaking, but knowing that pharmaceutical companies profit off of their struggles is revolting,” said Lizzy Price, spokesperson for Restore Public Trust. “With former Eli Lilly executive Alex Azar running the show at HHS, pharmaceutical companies are still profiting hand over fist as Americans suffer from exorbitantly high drug prices – sometimes being forced to choose between paying rent and buying the medications they need to stay alive. Azar should be working to lower drug prices, instead of shifting the blame to offer cover for pharmaceutical companies.”

The campaign features the stories of Americans who have been forced to pay too much for insulin, heart medicine, and other life-saving medications. In one featured story, someone died after they were forced to stop taking blood thinner when it became too expensive. 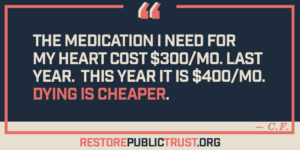 Today’s hearing is one of several that Congress has held in recent weeks on the high cost of prescription drugs. The House Energy & Commerce Oversight Subcommittee is holding a two hearing series investigating rising insulin prices, with the second hearing taking place tomorrow.